The only Palmeiras AND Corinthians supporter in Brazil

Eddie Thompson, the late chairman of Dundee United, was once famously quoted as saying, “You can change your wife, your house, your car, but you can never change your team”. I generally agree although unfortunately it means I’m destined for a life of perennial underwhelming – I support Gillingham.

However, whilst there may only be one team you’ll ever truly support, I think it’s also fairly normal to follow or have an affection for others. Even Eddie Thompson did, he was apparently a Motherwell fan before he became involved with Dundee United.

In my case I have a soft spot for my home town team of Sutton United. They were the first team that my father took me to watch when I was a kid and just six months into my football supporting career we saw them beat Coventry City 2-1. To this day they’re still the last non-league club to defeat a team from the top division in the FA Cup.

When I first travelled to South America in 2007 I made it my mission, as I thought I’d never return again, to go to as many games of football as possible. It’s safe to say that this particular mission was well and truly accomplished. With distinction. 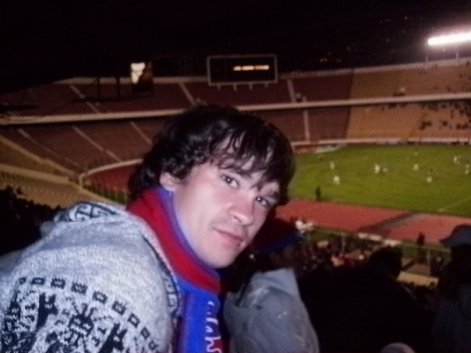 Football at 3500m in La Paz…Breathtaking….

I caught games in Peru, Bolivia, Chile and Argentina as well as fulfilling a lifetime’s ambition by watching a game at the Maracana in Rio.

And whilst in Buenos Aires I met a Brazilian from São Paulo who offered to show me around their home city when I was due to pass through a month later. A few days before arriving I exchanged emails with my new Brazilian friend:

“…don’t forget to tell me about your plans, let me know what you’d like to do….”

“I have found something that I’d really like to do while we are in Sao Paulo. You know the football team Corinthians? They were named after a team in England that are very close to where I live. I’d really like to see them play and as it turns out they are playing at home in Sao Paulo at 4pm on the 17th (the day before we leave)….You must take us! Please!!”

“I’m a Palmeiras fan, I can’t take you there”

“OMG! You know something, I must REALLY like you to agree to go to a Corinthians game!!

At the time I had no idea how big the rivalry between Palmeiras and Corinthians was. I just had an interest in Corinthians because of their links to Corinthian Casuals, an amateur club close to where I was from in South London and for whom some of my school teachers had played. 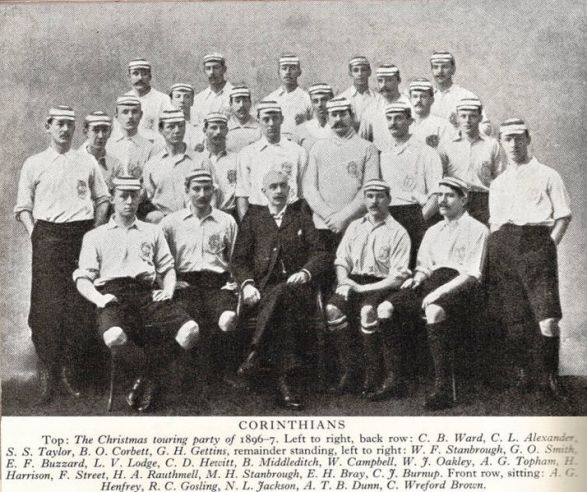 However, it soon became quite clear that the rivalry was VERY big indeed. That’s because my new Brazilian friend was not only a massive Palmeiras fan, she also turned out to be my future wife.

And thus began a quandry.

No, not the trivial matter of which one of us would move continent so that we could be together. No, I mean the one about which football team I should support. Should I follow my instincts and stick with Corinthians? Or should I make life easy for myself and opt for Palmeiras?

If only it were that easy.

One problem is that even my in-laws have split loyalties (My sister-in-law and mother-in-law are  Palmeiras whilst my father-in-law and their grandfather are Corinthians). Inevitably, it meant that one side of the family was going to end up being very disappointed, and upsetting your in-laws is definitely not a good thing to do.

Subsequently, there were sustained campaigns from both camps to try and influence me either way. First there were the presents – I now own four Corinthians and five Palmeiras shirts. Then there were the days out.

The first, during our last visit in 2009, came when my my father-in-law took me to the Corinthians training ground, courtesy of his best friend who is heavily involved with the club. I got a guided tour, watched the player’s train and was ordered to have my photo taken in the President’s seat. A pretty cool day out for someone who loves football. 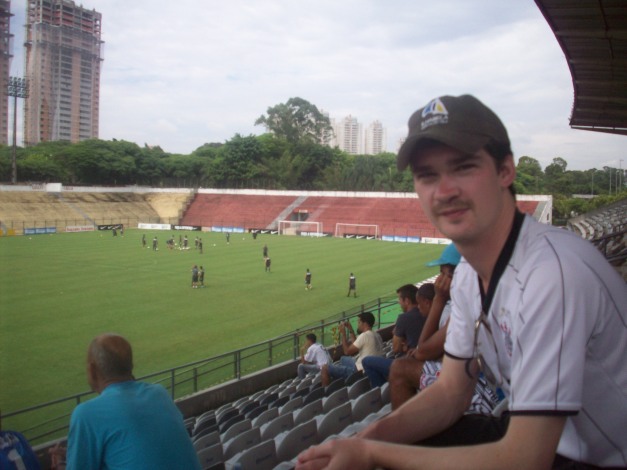 However, not to be outdone, my wife balanced this with a trip to watch Palmeiras play. They won and the goal scored by midfielder Diego Souza is said to be one of the best goals ever seen at the old Estadio Palestra – a plaque was even commissioned to commemorate it. Again, another great experience. 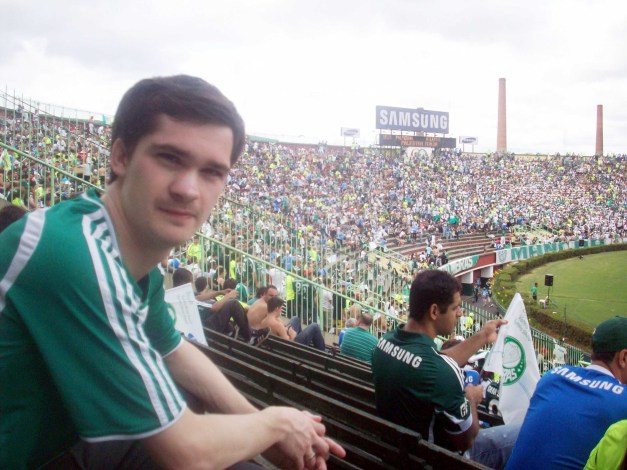 At the Estadio Palestra, Palmeiras shirt and all.

The problem was that this kind of left me feeling an affection for both teams. Then, it gradually dawned upon me that perhaps I might be becoming the only man in Brazil (and probably the world) to support BOTH of São Paulo’s fiercest footballing rivals. BOTH!

To a Brazilian, particularly one from São Paulo, this would be a preposterous idea –  as would the thought of someone owning and wearing shirts of both teams. Yet, after our trip I just couldn’t choose between them, no matter how hard I tried.

And so it was that when we moved to São Paulo in February I tried to do the impossible. That is, I attempted to follow both Corinthians and Palmeiras.

It started well enough. I watched a Libertadores game with my father-in-law wearing a Corinthians shirt and then I went to a Palmeiras game with my wife and sister-in-law. So far, so good!

But, as time went on I started to wonder whether this really was a sensible idea after all. First, there were the looks the porter gave me when having gone out wearing a Palmeiras shirt one day I went out the next wearing a Corinthians one. Then there were the awkward moments when Brazilians asked me which team I supported in Brazil. Inevitably, I realised this couldn’t go on and that the quandry had to end!

And how to resolve it? Well, I attended their encounter (Classico) in the São Paulo state championship on 25th March. 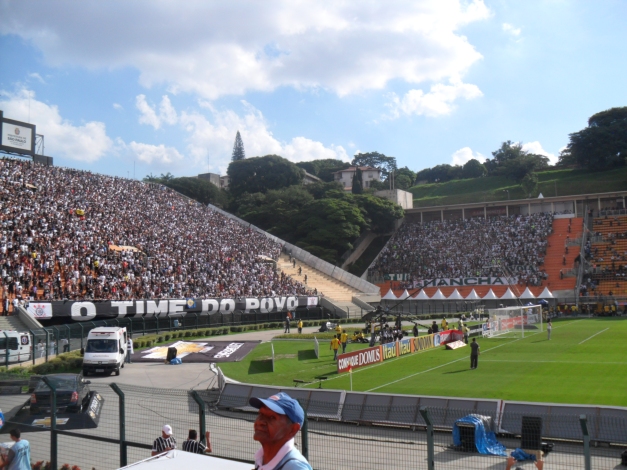 Who would it be?

Well, I ended up rooting for Palmeiras. I can’t put my finger on why, it was just one of those unexplainable feelings and was in spite of us sitting in the Corinthians end where it could have been very easy to get carried away by the atmosphere – especially as they came from behind to win 2-1. For some reason, I just kept looking over at the away end and thinking that I’d prefer to be in there.

Looking back, I think part of it was the fact that having supported smaller teams all my life Palmeiras reminded me a quite a bit of Gillingham. Ok, it might be pushing it to compare Palmeiras with Gillingham – they are, after all, one of the most successful teams in Brazilian history (including winning the Libertadores in 1999). However, on the day I could relate to the fact that they were the slight underdogs who were playing away from home against a richer and more popular rival. I’ve lived with that my whole life. 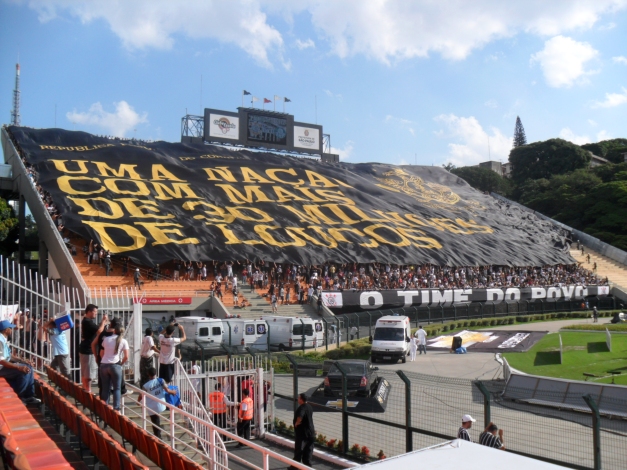 And with Palmeiras looking comfortable at 1-0 at half-time but then throwing it away in the second half, it  only went to reinforce the feeling that they, in recent times at least, have done a thoroughly outstanding job of shooting themselves in the foot and disappointing their fans. Again, a home from home.

Anyway, in the two months since the game I’ve had a little bit more time to reflect on the issue and I think I’m still slightly in favour of Palmeiras. However, even this hasn’t made the Palmeiras side of the family entirely happy since having been unbeaten prior to the Classico they then went on to have a disastrous run which included me going to see them lose 1-0 at home against little Mirassol. I am now known as “Pé frio”, which translates as “cold-feet” but which in Brazil simply means that you’re bad luck.

Nevertheless, despite all this I did opt to watch (and cheer on) Corinthians in the Libertadores with my father-in-law the other week rather than sit with the girls whilst they cheered on Palmeiras in the spare room. I”ll probably also go to their game in the next round if they qualify. And that, I’m pretty sure, is something no other Palmeiras fan would do.

Perhaps then I might really be the only Palmeiras and Corinthians fan in Brazil. I wonder what Eddie Thompson would think about that…

14 comments on “The only Palmeiras AND Corinthians supporter in Brazil”