Two things happened on Tuesday (18th) that made me think a bit about my status here in Brazil. Firstly, it was International Migrants Day, a UN ‘celebration’ which member states and NGOs are encouraged to observe through:

…the dissemination of information on the human rights and fundamental freedoms of migrants, and through the sharing of experiences and the design of actions to ensure their protection.

Secondly, with a grand total of four votes (including one each from my wife and sister-in-law), my blog was deemed worthy of an “honourable mention” on an expat blog website.

What interests me are the different connotations the words ‘(im)migrant’ and ‘expat’ have in terms of immigration. This has been something that has bothered me for a while, not only because I’m living outside the UK, but also because the issue of migration has dominated most of my adult life – both professionally and personally. For example, apart from seeing my wife be subjected to ridiculously strict immigration controls in the UK, you may also be aware that prior to moving to Brazil I worked with asylum-seekers and refugees as a social worker.

What International Migrants Day and expat blogs do is feed into a narrative about immigration that is mainly framed by the ‘West’, a narrative that differentiates between rich, privileged migrants from the Occident and poor, undeserving migrants moving in the opposite direction.

For example, in my last job I worked with unaccompanied minors –  children, sometimes as young as 12, who had fled countries like Afghanistan because their families had been murdered by the Taliban. Unfortunately, whilst my colleagues and I did our best to support these traumatised young people, the wider British society was rarely as compassionate.

Why? Well, immigration is a hot topic in the UK (when hasn’t it been?) and these days the word immigrant is rarely used in a way that is positive. There are a number of different types of immigrant (asylum-seekers, refugees, economic migrants, foreign students, etc), though I’m sure if you asked most people they probably wouldn’t be able to distinguish between them. For example, when I was travelling in 2007 I told another British traveller about my occupation, to which they said: “I sympathise with them but there really are just too many Polish in the UK.”

Nevertheless, despite the blurring of definitions there is no doubt that the bogeymen of all immigrants are asylum-seekers – like the children I worked with. To be an asylum-seeker from Afghanistan is to be: “an illegal”, “a scrounger”, “bogus”, “a criminal”, “a terrorist” or ……… (insert pejorative here). The public perception is that the UK is being flooded with asylum-seekers when in fact there were just 19,804 applications for asylum in 2011 (out of a total of 536,000 immigrants).

All this, of course, is a million miles away from idea of what an ‘expat’ is. But, what exactly is an expat? Let’s look at some definitions:

The word expat is a contraction of expatriate, which derives from the Latin word expatriatus. In medieval times, an expatriatus was someone who had left his or her home country to live somewhere else. So in today’s culture an expatriate is exactly that; someone who lives in a different location than that which they were born and brought up. In general expatriates are considered to be people who are residing in their host country temporarily, with the ultimate intention of returning home at a later date.

An Expatriate, or expat, is a person who is living in another country, or working overseas temporarily. The term is usual used to describe workers from another country residing within the country on a temporary or permanent basis.

Over the past 20 years, there has been a huge increase in the numbers of expats worldwide, there are no official figures but a fair estimate is in excess of 15 Million worldwide.

Well, I don’t know about you but expats sort of sound like most other economic immigrants to me, although it’s rare to ever find one referring to themselves as such. Why? Because to be referred to as a migrant is to be lumped in with all the others and frankly us Brits / Americans / Australians……(enter ‘Western’ – probably white – nationality here), wouldn’t dare be associated with the roughians from Asia, Africa or South America. We’re western, we’re superior and as such we deserve a special category – expat*.

Which is funny because most other forms of migrant are categorised by the reason they are migrating – admittedly within categories usually created by the ‘West’. Therefore, those entering the UK to claim political asylum are asylum-seekers whilst those who are successfully granted asylum are called refugees. Additionally, people who move to work are called economic migrants and those who move to study are foreign students.

How about expats? Can you get a special visa to be an expat?

Expat is not an official immigration category, it is just something ‘western’ immigrants have made up to make themselves feel better (superior?). In reality they’re most likely to fit into the economic migrant category. 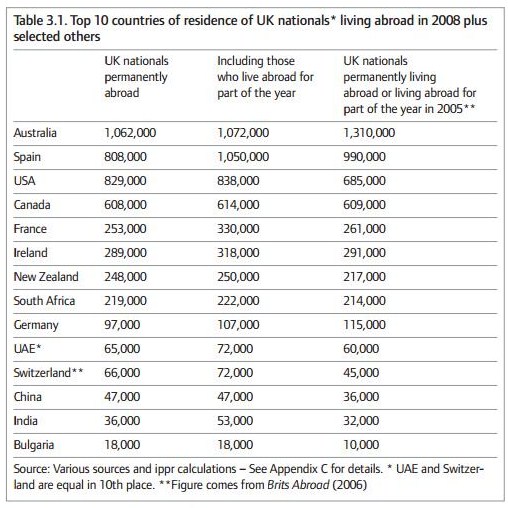 As such, whilst International Migrants Day serves as a reminder that many migrants still have to fight for their rights and freedoms, it should also remind us rich (relatively) ‘westerners’ (like me), who write quirky blogs about our experiences in strange foreign lands, that really we’re not that dissimilar.

Bollocks, I think my blog may have just eaten itself.

*NB. The Wiki answer seems to imply this divide by estimating that there are 15 million expats worldwide.  However, according to the World Bank, 215 million people are said to live outside their countries of origin although clearly only 15 million of them are worthy of the status of expat.

14 comments on “Expat or immigrant?”