The Maracanã – Field of Dreams

Even at an early age I was hooked on just about everything to do with football, and my addiction become an obsession when I received a huge encyclopedia about the beautiful game one Christmas.

From it I devoured its history, as well as old statistics and stunning overhead shots of various stadia around the world. One in particular that always stood out was of the Maracanã in Rio and not only because it was the home of the great Brazil teams that my father had told me about, but also because to a young me it just looked so huge – largely, I guess, because it was.

Amazed, I read about how almost 200,000 people (although probably far more) filled it for the 1950 World Cup final and wondered how on earth it was possible to fit almost the entire population of my town in South London into one stadium.

“One day”, I thought, “I must go there”, although having dreams and fulfilling them are often entirely different matters – especially when 5,000 miles of Atlantic Ocean lie in the way.

Nevertheless, about fifteen or so years later on 2nd February 2008 the dream came true. Forget the fact that I was actually in Rio for Carnaval, that day was the highlight of my trip to South America (Ed. Er, what about when you met your wife in Buenos Aires?), because it was the day I went to see Vasco da Gama play Botafogo at the Maracanã

The football itself conveniently lived up to every possible stereotype one can imagine about South American football – spectacular goals, rash defending, a last minute penalty winner and two red cards.

And then there was the stadium itself – a little worn around the edges but still hugely immense. And with Botafogo fans bouncing around me waving flares and full Samba band in tow it was hard not to get a little carried away with the place’s legend.

Buzzing with adrenaline and emotion as I left the stadium I remarked to my travel buddy about how awesome it would be to come back to Rio for the World Cup in 2014.

“Imagine”, I said, “England playing Brazil in the final in front of all this and Rooney scoring a late winner. I’d pay almost anything to watch that.”

Yet, yesterday that dream almost came true. Granted, it’s 2013 and we’re still a year away from the World Cup, but Brazil did play England at the Maracanã and Rooney did very nearly score a spectacular late winner.

Not that it was ever certain mind. As soon as the fixture was announced I made it a priority to get a ticket, although there was the little matter of me being in London for my best friend’s wedding around the time of the game. No problem, I thought, my wife won’t mind me leaving her in London and travelling back to Brazil a few days early. 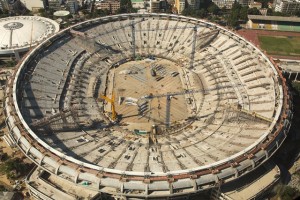 The Maracanã in January 2013

Then there was the concern that the stadium wouldn’t actually be ready anyway, which given that it was only 80% completed as recently as January this year (without seats, a roof or pitch) was entirely understandable. Additionally, heavy rains had caused flooding and further delays in March and so those concerns started to become little too close for comfort. Further problems at a test event in April didn’t particularly inspire confidence either.

And then, when the tickets actually went on sale two weeks ago it was inevitably the day when I wouldn’t have access to the internet. Yet that evening, using my antique iPhone 3 through a dodgy pub internet connection, I discovered some were still available. What followed was an agonising twenty minutes in which my iPhone reloaded futebolcard.com about fifty times whilst refusing to accept my credit card details. However, at the fifty-first attempt the internet god looked down upon me, took pity and proclaimed that: “Andy must go to the game. It is his destiny!” Thirty seconds of connection later and it was confirmed; I was going to the Maracana!

Last Thursday, as I sat in my mum’s house in Kent contemplating an impending 36 hours of travel that would take me from Birchington to London and then São Paulo to Rio via a combination of train, Tube, plane, taxi, bus, Metro and car,  I received the news that the game had been cancelled due to the safety concerns.

“Fuck you!” I shouted across the front room, which both managed to upset and confuse my mum at the same time.

Of course, as most Brazilians or people have spent any time in Brazil suspected, there was never any real chance of the game not going ahead. In what effectively was a very public way of saying, “My dick is bigger than yours” (or something like that), the organisers, local government and courts decided to invite even further ridicule upon themselves (quite an achievement) by having a hissy fit over filing some paperwork. What should have been a behind doors conversation became an excruciatingly global embarrassment for a country whose World Cup preparations have had already its fair / unfair share of criticism.

Of course, by the time I was in the air the paperwork had been filed, the game was back on and 24 hours later I was in Rio and full of anticipation, if not a little tired.

So, what of the new Maracanã then?

Well, it is, quite simply, stunning. Whilst the shell of the stadium has been maintained everything inside is completely new.

And, despite the fears of many and the schadenfreudal hopes of the media, the whole day was a fantastic success – apart from Brazil’s equaliser at the end.

The organisation was superb, which is not something I’ve often said when attending games in Brazil, with getting in being fairly straightforward, security being tight but not overwhelming and most amenities in and around the ground working well. For example, upon leaving the ground we were able to catch the Metro, reach the centre of the city and be in our car ready to drive back to Sampa all within 40 minutes of the final whistle.

Additionally, the new design, whilst retaining the oval shape of the old stadium, seems to be far more enclosed and this means the fans appear to be closer to the pitch whilst the acoustics are aided by a more extensive roof.

Atmosphere, of course, is not something that is necessarily a problem when a stadium is full of Brazilians, but as with many new stadiums there’s always the concern that with an increase in comfort there comes a sanitisation in the atmosphere. Yesterday, it was pretty impressive despite the annoying tendency of Brazilian fans to boo their team if they aren’t winning 5-0 after 10 minutes. Worryingly there were some very noticeable periods of library-like silence, particularly at the beginning of the second half, and the banning of musical instruments in the stadium on Sunday is hopefully not a sign that Brazilians will be coercively forced to change the way they watch and experience football in the future.

The stadium is also clearly far from being a fully completed project. The rickety makeshift wooden stairs that take you from the Metro station to ground level didn’t particularly inspire much confidence and there is certainly plenty of work to be done in the immediate areas around the stadium. Additionally, it was pretty obvious that some of the work inside the stadium had been finished very late on in the day, with construction dust on many of the seats and protruding screws pinning some of them to the ground.

Yet, yesterday really did provide optimism that despite the greed and ineptness that has dogged much of the preparations for the World Cup, the tournament itself will most likely be something pretty special. Brazil is likely to be like every other host nation of an Olympics and World Cup (particularly those not considered ‘developed’), in that pre-tournament problems and concerns – real or not – will be instantly forgotten once the first ball is kicked.

Whether or not this is just is a discussion for people far more important than myself. All I know is that for a layman like myself yesterday’s taster has left me with no doubt that there will be no way in hell that I’m going miss a World Cup in Brazil.

14 comments on “The Maracanã – Field of Dreams”