In last week’s post I wrote about Colorado Indica, an Indian Pale Ale that seems to have become something of a cult hit amongst Brazilian microbrew drinkers – and one that I’ll readily admit is a personal favourite.

But, watch out kids for there’s a new challenger to the throne of hops….

Actually that’s a little white lie since I did in fact have a taster at the recent Brasil Brau beer convention. Unfortunately, whilst I remembered it being very tasty I’d also had more than half a dozen (almost definitely more) other beers and so my memory of it is, I’ll be honest, a little bit hazy.

Anyway, seeing as we’ve now been reunited – outside the lethal environs of a beer festival – it would only seem proper that I should use this week’s Brazilian Beer of the Week to nudge my fuzzy recollection of it.

But let’s be quick… 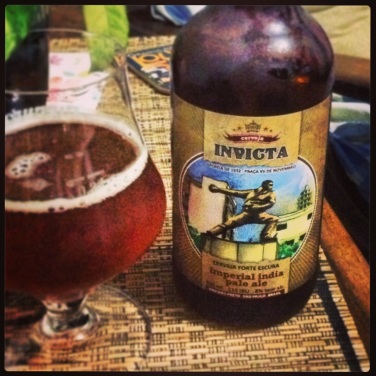 The Invicta microbrewery was, according to its website, founded in Ribeirão Preto (a city within the state of São Paulo) by Master Brewer Rodrigo Silveira after he returned home to Brazil from travelling around the world tasting the planet’s finest beers.

With a passion for microbrews, Silveira’s Invicta produces eight beers, most of which are of German and British heritage and inspiration.

Following a recent investment of $1 million the brewery currently produces 100,000 litres of beer per month.

As noted last week, Indian Pale Ales are produced with a high hop and alcohol content, and this has the effect of producing a distinctively bitter taste.

Imperial Indian Pale Ales (or Double IPAs) though, push the boundaries further by having an even larger hop and alcohol content.

Invicta’s version pours a slightly cloudy and dark amber colour with a slightly off-white, short-lasting head. As for its taste, well it’s rather splendid.

Like the Indica it has some fruity notes and this helps to balance its bitterness. However, as should be expected, the bitterness itself is on a different level to that of the Indica, with the hops completely dominating its overall flavour. For the unsuspecting Brazilian beer drinker who is accustomed to Pilsners like Brahma, Skol et al, this may make it a significant challenge for the taste-buds.

However, for those with seriously acerbic tastes then this beast is definitely one that should be on your shopping list.

the book is on the table’s Verdict: Given its strength and the depth of its taste I’m not sure I could drink more than one or two of these in one sitting – although I’m pretty sure I’d say the same for any beer that is 8%.

However, what’s most important is that beers like Invicta’s Imperial India Ale are continuing to help push the envelope within the Brazilian beer market, and for this we should all be thankful.