In the months prior to leaving Brazil I’d written about walking and psychogeography as means of finding new ways to see, explore and understand the complexities and unseen beauty of São Paulo. It was fitting then, that during those final few months I became increasingly aware of a stencilled call to arms which seemed to echo my own advocacy for urban exploration: 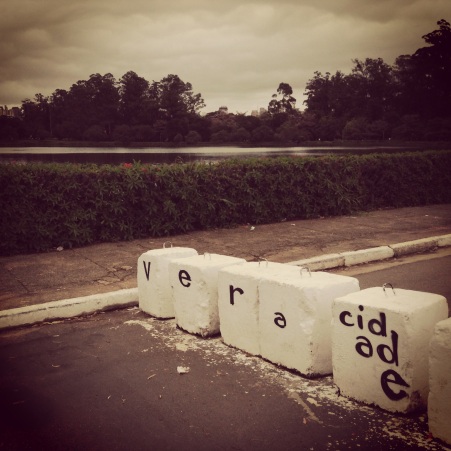 In the context of an iconic SP location like Parque Ibirapuera – where I took the photograph above – ‘ver a cidade’ (see the city) seems to convey a fairly straightforward observation: look how beautiful our city is.  END_OF_DOCUMENT_TOKEN_TO_BE_REPLACED

Reading between the lines

On Saturday, the Brazil Character Lab, a twitter profile that provides links to blogs, articles and news related to Brazil, started what became a fairly heated debate when it repeated what one expat had tweeted about Brazilian reading habits – namely that it’s rare to see a Brazilian reading a book in public that isn’t the bible.

However, a short while later my timeline started to draw attention to some commentators who were providing some rather more well-considered ripostes than my own. Initially, there were some Brazilians who took umbrage at what they considered to be a generalised slight upon their taste (or lack of) in literature. Counterarguments duly followed, in which it was suggested that it is not the act of seeing Brazilians read that is rare, but rather the fact that what they do read is rarely anything other than something related to a job or course – or the bible. Furthermore, the scope of public reading in Brazil was unfavourably compared to the UK and US.

My thoughts were then twofold. Firstly, I replied that I thought it unfair to compare the content and prevalence of reading in Brazil with that in the UK or US. As I’ve noted before, whilst Brazil’s economic boom has lifted millions out of poverty in the last ten years it has yet to invest as heavily in its infrastructure, including its public education system. As such, with the vast majority of Brazilian children (80% in 2010) commonly only receiving basic schooling from lowly paid / motivated teachers, it may not subsequently come as too much of a surprise that a significant proportion of the population is either completely or functionally illiterate, and thus does not acquire suitable inspiration to read either a Chekov, Orwell or Lispector before going to bed – or for the sake of this argument, whilst catching a bus. END_OF_DOCUMENT_TOKEN_TO_BE_REPLACED